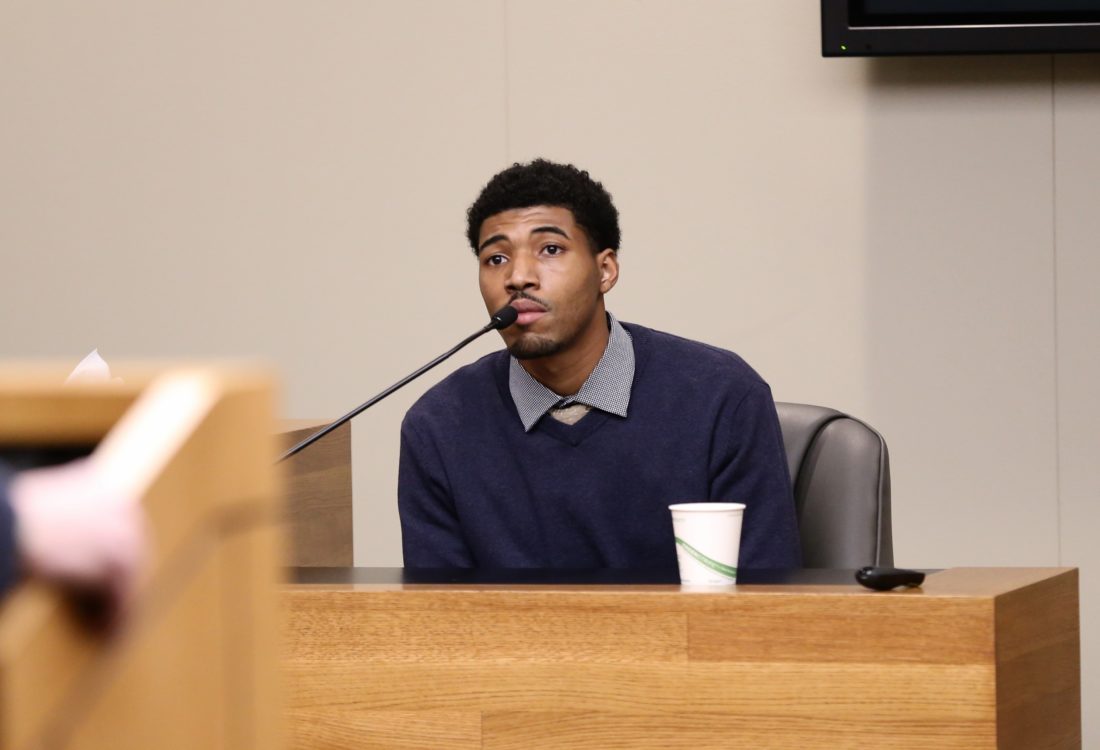 On Tuesday, a judge found that Wilson’s trial attorney failed to review hundreds of text messages from his 17-year-old accuser whom he met at a popular bar near the University of Kansas campus.

The Lawrence Journal-World reports that Douglas County Judge Sally Pokorny said she will soon order Albert Wilson transferred from a prison in Hutchinson back to the Douglas County Jail for a new bond hearing and the setting of a new trial.

In a second court hearing held on March 23rd Judge Sally Pokorny set Wilson’s next court date for May 13, when a trial setting will be considered.

Attorney Suzanne Valdez said during the hearing that her office planned to work toward resolving the case without a second trial. Wilson was released later that day on a $100,000 bond.

Judge Sally Pokorny set Wilson’s next court date for May 13, when a trial setting will be considered.

KSN NEWS — New hope have been revived, with many calling for a new trial from Senator Oletha Faust Goudeau to Sedgwick Co. Commissioner. The case has also garnered the attention of the Black Lives Matter Movement.

Lack of Evidence and Jury bias are reasons that many believe was a wrongful conviction. The jury that found Wilson guilty was made up of all white jurors and majority female.

“Our ultimate goal is to prove Albert’s innocence and bring him home. By sharing his story, we are showing people that this is not an isolated incident. If you are black, brown or broke, you do not have a fair chance in our criminal justice system. That has to change. I hope Albert’s case has and will continue to shed light on the issue of social injustice. We will not stop until he is home, and we hope to have everyone’s support at his hearing in August.”

LJW —Albert Wilson, 23, was sentenced to prison Wednesday by Douglas County District Court Judge Sally Pokorny, to 147 months, or just over 12 years, in prison. She said that will be followed by lifetime post-release supervision and he must register as a sexual offender.For a person with no criminal history — as in Wilson’s case — Wilson’s sentence is the lowest end of what’s called for by Kansas sentencing guidelines for rape. His appointed attorney, Forrest Lowry, had asked the judge to depart from sentencing guidelines and grant Wilson probation, or at least a shorter prison sentence, but that request was denied.

More than two dozen supporters of Wilson attended the hearing. Several friends and relatives spoke on his behalf, describing a “selfless” young man with good character, a good work ethic and big goals for his life.

He told the judge he was not a bad person and asked her to do anything she could to help him via a lighter sentence. “I’m sorry for the whole situation,” he said.

According to Wilson’s family, they have already filed for an appeal in the case. It’s a shame that yet another young black man will have to spend the best years of his life in prison for a case that lacked so much evidence. If you believe that justice wasn’t served today, please donate to his gofundme and help with the cost of his legal fees by following the link here. https://www.gofundme.com/freealbertwilson

Source —Once again, the criminal justice system in America has failed yet another young black man. Albert N. Wilson the name of the accused was falsely charged and found guilty of the rape of a 17-year old girl he meet at a Lawrence college bar in September 2016.

Wilson, testified during his trial on Jan. 9, 2019, in Douglas Country District Court and maintained his innocence and denied the accusations.

“She didn’t seem intoxicated at all,” Wilson said. He also said the pair’s contact inside the bar was mutual and that they never had intercourse, as the girl testified.” ~Wilson

Wilson was a full-time KU student after earning his associates degree at a community college at the time of the incident. Wilson  accompanied a friend to the bar where he met the girl and her relative while waiting in line into the Boom Boom Room. Wilson was carded, a procedure where you are required to present your I.D. card  to the gate-keeper proving verification of your legal age. But the girl was able to gain access inside the bar without being carded. So, she had no business being there in the first place.
He didn’t know she was 17, and the Owner of the bar should be held accountable for his lack of following through with proper procedures in keeping underage patrons from enter the bar. Wilson assumed that she deserved to be there and was totally fooled by this girl. Surveillance footage from the bar, shows her sexually advancing on him at the bar, pulling his hand and kissing him. They left the bar, and preceded back to Wilson’s home holding hands. She did not seem distressed or shown signs that she was being lead against her will.
After they arrived at his home, he said they kissed and continued to make-out on his bed for about 5 minutes. He maintained that they never had sex. Wilson, then said he received a text and a missed call from his friend who was looking for him. He cut the make-out session short and they both headed back to the bar. The girl,  appeared angry and upset by his decision. Videos shown the two returning back to the bar about 20 minutes later.
Kansas Bureau of Investigation scientists testified that while Wilson’s DNA was found on the girl’s chest — where he said he kissed her — no seminal fluid or DNA was found on her clothing or on a vaginal swab. There was no evidence of vaginal busing or inflammation to prove her claims.
An reasonably intelligent person can understand that it’s virtually impossible for a Black man whom penis size usually averages between 7.5 – 10 inches can’t  have sex with a girl without leaving a trace of evidence! It’s obvious, that this girl is lying.
This girl felt rejected and took out her revenge on Wilson, because she felt that a Black man should not have denied her. “White privilege” allowed her to use the justice system to ruin a promising young man’s life. I believe Albert Wilson is 100% innocent and should get an appeal!
His cousin Brylan Donaldson is bravely leading the charge and actively seeking justice for Wilson by starting an petition on change.org to appeal the court’s decision and he needs your help! Sign the petition below and show your support. And visit his official website to get to know what Albert Wilson meant to his family and friends. https://www.freealbertwilson.com/
source

EVERYBODY: Free Albert Wilson from the crooked Kansas legal system!